Hey everyone! This will be my first post on the blog. You guys can call me Sid and if you ever see the name Sidx30 out on the internet, it's most likely me! I am one of the awesome 3D artists working on Galactose and I am going to a share a bit on what I have been making.....err destroying to be precise!

I've been working on taking various parts out of the hot dog cruiser and making them into broken parts and debris. This will allow us to have a more realistic cruiser explosion and it will also make it more dangerous to be around a cruiser when it explodes. These parts will also be lingering around in space creating more dynamic obstacles for the player to take into account. I've attached a little screenshot showing what I've made below!

That's all for now. Stay tuned for our weekly updates! We are going to be pushing out some really cool stuff! 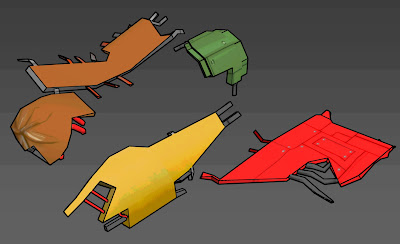 Posted by Unknown at 1:38 PM No comments:

In this week's post I'll be talking about some of our plans and goals for the next few months.

Before I go any further however, I'd like to emphasize that all plans are subject to change, they just reflect our current plans at this ephemeral moment in time.

Overall, our plan has had four main phases:

Phase 1: The drone combat system and our capstone. This phase has been pretty much completed.

Phase 2: RTS Design & Implementation. This is where we are planning to add some RTS elements to our game, and is the phase that we are currently working on.

Phase 3: "Big Content". This is the phase where we will build a real campaign and flesh out a story and add lots of content to greatly expand the gameplay beyond an hour or so.

Phase 4: "Marketing & Polishing". This is the final phase we've planned; Here, we would focus heavy duty on marketing and final polish details.


While we're currently in phase 2, we have done a good amount of the RTS design, and so have started doing some of the design for phase 3. Additionally, we are currently thinking of doing phases 3 and 4 slightly differently. In particular, we're thinking of focusing on about two or three missions for phase 3 initially, ones which will provide a good cross-section of gameplay, and which we can polish to a very high level.

The plan would then be to finish most of the design, and create a budget plan which we could use to set a target budget for a Kickstarter goal.

Finally, we would launch a kickstarter alongside a new, highly polished demo and see if we can actually make this game full-time.

Anyways, we've begun designing some of the missions for this demo, and we have some cool ideas. But I'll leave that for other people to talk about, in other future weeks.
Posted by John O'Meara at 7:12 PM No comments:

Hey all! It's been a while since I've posted. Time kinda disappears on you after you graduate and get a job... BUT- we are all still actively working here, and to prove it I'm showing off the beginnings of a new feature we're adding to the mothership/command view.

To make strategizing both more significant and more manageable we're adding the ability to execute pre-defined battle plans or tactics. They could be as simple as a pincer move, or something a little more complex like having two forces of fighters alternatively swoop in and out at a point for a few minutes to clear out defenses and then flying in some bomber squadrons to deal a lethal blow to a mothership.

The system basically works as a finite state machine of ship groups, orders, points in space, and timing/order completion conditions. For example, the video below shows a basic pincer move. The logic behind it is essentially as follows:


Please pardon the lower graphics settings I'm using in the game; the machine I'm currently working with isn't quite the most powerful :( so I can't use the fancy shields and there are a few lag/skips I'm still ironing out...

Anywho, there's much more to come! Keep checking back with us week by week for updates :)
Posted by Anonymous at 6:16 PM No comments: